info_outline What is Cardano

Developers position Cardano as the “third generation blockchain." The main goal of the platform is to implement all the best features of Litecoin, bitcoin and ethereum into one cryptocurrency; complementing the resulting mixture with a number of additional innovative technologies. Security and reliability are higher than Bitcoin, p2p transactions are faster and cheaper than Litecoin, and smart contracts are better implemented than Ethereum.

Cardano uses the innovative Proof of Stake algorithm called Ouroboros, which is the first truly secure method for users, as confirmed by scientific research. Legal support. Unlike many cryptocurrencies that offer anonymity and sacrifice their reputation (money laundering charges), the Cardano team has very well established relations with governments and regulatory authorities (especially in Japan), which until recently had condemned the idea of ​​cryptocurrencies.

- Continuous work to improve the project. - A serious approach to development, attracting the best scientists and businessmen to the project. - Stable flow of investors. - Plans to achieve full decentralization of the system. - The attractiveness of using innovative technological solutions in the project. - Cardano is an ambitious project that tackled many important issues of the crypto industry. 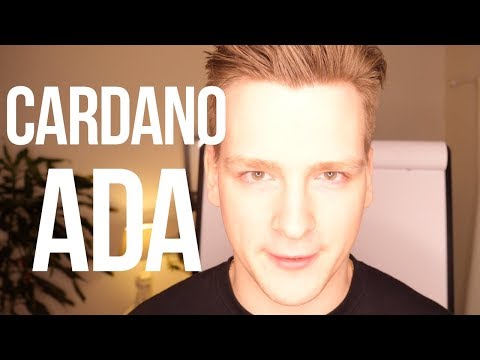 What is Cardano ADA? Programmer explains. | Ivan on Tech

What is Cardano ADA? Programmer explains.

The whitepaper of Cardano is 54 Pages long.

Cardano was founded back in September 2017. Its source code was released publicly on github on October 2016 under the Apache License 2.0 license. Organization wise, Cardanos Development is Semi-centralized and is being developed under the lead of Aggelos Kiayias.

The consensus on which the Cardano network is run is called Proof of Stake, while the underlying algorithm is called Ouroboros. In the current state of Cardano currently is Beta version

Cardano is a decentralised public blockchain and cryptocurrency project and is fully open source. Cardano is developing a smart contract platform which seeks to deliver more advanced features than any protocol previously developed. It is the first blockchain platform to evolve out of a scientific philosophy and a research-first driven approach. The development team consists of a large global collective of expert engineers and researchers.

The Google Trends chart displays the search interest on google in Cardano relative to its peak over the last year. A rising chart shows growing interest int he project.

Every change to the codebase of Cardano is registered as a commit. More active projects have many commits, dead projects nearly none.

Convert between ADA and USD with the live Cardano prices, aggregated from all big exchanges that trade Cardano.

Charles Hoskinson - Ceo&founder Charles Hoskinson is a Colorado-based technology entrepreneur and mathematician. He attended Metropolitan State University of Denver and University of Colorado Boulder to study analytic number theory before moving into cryptography through industry exposure. His professional experience includes founding three cryptocurrency-related start-ups – Invictus Innovations, Ethereum and IOHK – and he has held a variety of posts in both the public and private sectors. He was the founding chairman of the Bitcoin Foundation’s education committee and established the Cryptocurrency Research Group in 2013.

Cardano was built by a team of professionals including researchers, scientists, and engineers that took a strictly scientific approach. It was built with the aim of providing more enhanced and advanced functions of all other cryptocurrencies combined. The creators are adamant to roll out their own stack of technology that could support the implementation of smart contracts and to build a platform where developers can work on their decentralized applications (DApps). The blockchain also aims to achieve interoperability between other cryptocurrency blockchains (Kiayias, 2019).

Cardano has adopted a policy of research-first for all of its products. The underlying technical aspects of the Cardano platform have already been peer-reviewed and scientifically approved, but there’s no finished product yet released that supports the developed version of the scientific techniques. In terms of decentralization, Cardano has failed to release any product that proves that the blockchain is free from the control of any governing authority (Undersearcher, 2019). Up till now, the Cardano blockchain was centralized and was being controlled by IOHK Company (Maurya, 2018).

How things stand for Cardano

The main highlight of the Cardano roadmap is its initial coin offering of ADA which managed to gather around $62,200,000 by the end of January 2017. However, a vast majority (90%) of the ADA buyers were of Japanese origin. This raised a serious concern in the crypto-community as this was a major sign that the technology evidently lacked diversity. According to Charles Hoskinson, the “Japanese bias” was due to the marketing strategy of Cardano with its main focus on Japan, which is so because the crypto-market there offers the most long term growth (McIntosh, 2018).

The Cardano Foundation is dedicated to steadily improving and updating platform, wallets, and concepts that can be used in the future for Cardano blockchain. The GitHub repository has been proven to be highly active and has a few thousand commits already. However, the amount of code updates each commit (upload of new code) offers is minimal. The language used for the Cardano blockchain codebase is the Haskell programming language, which is quite surprising, as the language is considered by a lot of experts to be widely obsolete, especially in this era of more modern languages.

For now, it is too soon to predict anything about Cardano. Sure, the technology looks impressive and the team might be able to develop and deliver a fully functional platform that could solve the problems that other Smart Contract centric cryptocurrencies are facing. Also, there have been a lot of promises on what Cardano plans to offer its users. Cardano will gain momentum in such events, but for now, it can be said that other platforms that are developed and currently offer better incentives will remain ahead of Cardano for the time being. Cardano is currently restricted to East Asian countries and thus, will see its growth predominantly in these areas alone.

The main project that Cardano is focusing on is the development and implementation of its platform. The team is also researching on KMZ sidechain protocol to achieve greater scalability and Quantum Resistant Signatures to prevent cyber-attacks from quantum computers.

The potential for the growth of Cardano is massive as the industry is evolving each day. Developers are eager to shift to better systems and networks. It now depends on how fast the development team can finish their project and introduce revolutionary functions that could render other DApp platforms obsolete. The best possibility for the blockchain is that it could become the most widely used and default platform for the development of DApps.

Cardano aims to provide better scalable technologies than Ethereum, Bitcoin and other cryptocurrencies combined. Ethereum has proven itself to be Cardano’s biggest competition in terms of their work on Smart Contracts. Although Cardano boasts about its additional features and scalable technology, there are considerable network shortcomings, which clearly gives Ethereum the lead in their development.

According to Charles Hoskinson, there are three big cryptocurrency markets in the world namely China, Japan, and South Korea and the marketing strategy of Cardano is focusing on the same. The foundation partnered with Metaps and launched a cryptocurrency prepaid card that will be released in South Korea at the end of December. The card will be available for sale at 33,000 retail Korean merchants (MetapsPlus, 2018).

The Cardano (ADA) community is growing at a fast pace. More and more people are putting their trust in Charles Hoskinson and his vision. However, Cardano is slow in delivering community-driven projects and has up until now not released its main project of a decentralized platform.

The Cardano Foundation claims that there are over 50 developers that are working full time on developing the blockchain and its products. These include researchers, scientists, and engineers (Mitchell, 2019).