info_outline What is BSV

Bitcoin SV (BSV) started in November 2018 as a hard fork of Bitcoin Cash, which itself was a hard forked version of the original Bitcoin. BSV was one of two coins that emerged from the hard fork, with Bitcoin Cash ABC as the other coin created from the event.

Upon creation of Bitcoin SV, Bitcoin cash holders who had their private keys or kept their Bitcoins on a service that supported the split were able to receive equal amounts of Bitcoin SV and Bitcoin Cash ABC, resulting in further divergence in Bitcoin price dynamics. The Bitcoin SV team said that its vision is to restore the Bitcoin protocol to its original design.

Bitcoin SV also enables massive scaling, which its team says will pave the way for the BSV blockchain to support significantly higher transaction volumes and more transaction fees for miners. This is important for miners to maintain profitability as the block reward will halve again in the year 2020 (reducing from 12 BSV to 6.25 BSV for each block), and halve again in later years.Bitcoin price.. 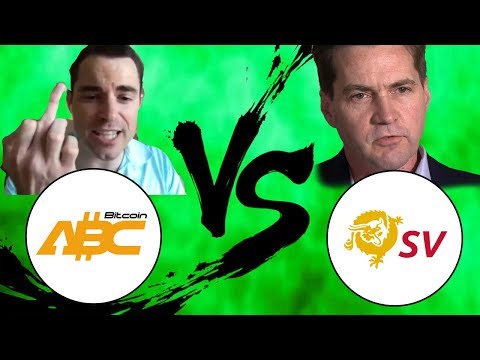 In this video we look at two competing forks of Bitcoin Cash, SV and ABC. We focus on the technical differences of the chains such as block limit, OP_RETURN opcodes and their futur ...

THERE IS NO BITCOIN SV WHITEPAPER - The Bitcoin SV website posted the original Bitcoin whitepaper instead.

The whitepaper of Bitcoin Cash SV is 9 Pages long.

Bitcoin Cash SV was founded back in February 2018. Its source code was released publicly on github on August 2018 under the Other license. Organization wise, Bitcoin Cash SVs Development is Centralized and is being developed under the lead of Dr Craig S Wright.

There is no official BSV-subreddit yet

There is no official Telegram Channel for BSV yet

The Google Trends chart displays the search interest on google in Bitcoin Cash SV relative to its peak over the last year. A rising chart shows growing interest int he project.

Every change to the codebase of Bitcoin Cash SV is registered as a commit. More active projects have many commits, dead projects nearly none.

When the world of cryptocurrencies came into existence through the birth of Bitcoin, Satoshi Nakamoto was the visionary who laid down the mission of the technology in his whitepaper ‘’Bitcoin: A Peer-to-Peer Electronic Cash System”. As the technology evolved and many other cryptocurrencies made their way into the crypto-world, the technology deviated greatly from its main course. Bitcoin Blockchain has been broken down into smaller factions, each offering its own version of the Bitcoin. Bitcoin encountered its first hard fork on August 2017 and with it ‘Bitcoin Cash (BCH)’ rose to stage. Bitcoin Cash (BCH) was developed with the aim of solving the scalability issue of technology and creating a more efficient replacement. Note that Bitcoin Cash (BCH) did not(!) replace Bitcoin (BTC).
After some time, the Bitcoin Cash community felt that the technology had deviated from the Bitcoin Cash vision as defined in the whitepaper from the original Bitcoin (BTC). Once the Bitcoin Cash fork happened, Bitcoin SV (BSV) (SV stands for Satoshi Vision) and Bitcoin ABC (BCHABC) (ABC stands for Adjustable Blocksize Cap) were born (SFOX, 2018). According to the official spokesperson, Bitcoin SV is the restoration of the original technology. It aims to return to the original plan and vision of Satoshi by working for a completely decentralized network and using the cryptocurrency solely as a tool for payment and trade exchange (ChangeNow, 2018).

Bitcoin SV is a relatively new entrant to the crypto market as it had its foundation recently set up. The team has not yet focused on developing any product of theirs that runs on the Bitcoin SV blockchain. The collective focus of the team, now, is at the restoration of the original protocols of Bitcoin and developing those protocols to address the issues of scalability and security.

The main spokesperson for Bitcoin SV is Craig Wright while the technology is pursuing the main foundation principles of Satoshi Nakamoto. Not surprisingly, Craig Wright has claimed that he is, in fact, Satoshi Nakamoto, the original creator of Bitcoin. He did not stop there, he has also strengthened his position by winning US copyright registrations for Bitcoin’s original (Bambrough, 2019). The Bitcoin SV project is owned by the Bitcoin Foundation on behalf of the BSV community.
Note: If Craig Wright had developed Bitcoin, he should have access to the keys that store the earliest Bitcoins, which would’ve been mined on his computer. These coins never moved in Bitcoin's history.

How things stand for BSV

Bitcoin SV’s inception was marked both by a highlight and a scandal for the technology. In August 2018, in trying to pursue the actualization of nChain and Coin Geek, Bitcoin Cash forked and two separate communities namely Bitcoin ABC and Bitcoin SV came in to being. Bitcoin SV’s leadership and the community, on the whole, were hostile in their dealings as they made repeated aggressive attempts to practically wipe out Bitcoin Cash’s supposedly deviated technology by taking all of its hashing power. The community was adamant to compel Bitcoin’s original community to accept the Satoshi Vision by force. This crypto-civil-war went on for around a week before both technologies decided that they had considerable representation in form of their community and they should focus on sustaining that (SFOX, 2018).
Another major highlight for Bitcoin SV came in May 2019, when the cryptocurrency surged more than 120 percent. This was partly due to the rather surprising development as the founder, Craig White, succeeded in ‘proving’ himself as the original Satoshi Nakamoto and registering the Bitcoin white paper’s copyrights to his name (Ouimet, 2019).

Bitcoin SV’s technical developments are based on the original Bitcoin whitepaper. The code development included restoring the Blockchain network in its original form, bring back the old protocols and improving the transactional performance of the cryptocurrency. The main code of development has been done under the leadership of Daniel Connolly and Steve Shadders (Bitcoin SV, 2018).

The market has a mixed opinion about Bitcoin SV. The technology will and probably may not survive, mainly because of the reputation of Bitcoin SV’s founder Craig Wright who is deemed as a scam by many.

Bitcoin SV is a project in itself, started by the Bitcoin community, nChain, and CoinGeek. The project aims to restore the original values and core values of Bitcoin as envisioned by Satoshi Nakamoto. The end goal of the project is to develop the technology towards ‘Genesis’, which is the full restoration and implementation of the Bitcoin Protocol.

The technology might not be as successful in the short-term since the development of the protocol is still underway, but it has shown potential for growth in the following years.

Concerning the official website of Bitcoin SV, the cryptocurrency has made a number of valuable partnerships in the market. A number of cryptocurrency wallets like Atomic Wallets, BC Bitcoin, Bitaddress, etc. host Bitcoin SV (among other cryptocurrencies) while many exchanges, although not the widely used ones offer trading of Bitcoin SV. As the technology strengthens its holdings, a lot of people are becoming interested and new partnerships are being announced. Recently, DriveMarkets’ CEO, Kate Hiscox, revealed that they will be partnering with Bitcoin SV to launch out DRIVE Pay (Editor, 2019). Also, Bitcoin SV will be sponsoring the International Professional Pool Association this year, opening doors for many opportunities for the real-life application and implementation of the technology (Tonin, 2019).

One of the biggest advantages Bitcoin SV has over its competitors is the fact that it is backed by the Bitcoin Association, the largest and the oldest community that promotes the Bitcoin technology. The community as a whole supports the original vision behind Bitcoin and is working towards bringing into fruition the vision of the original version of the Blockchain.

The development team features many experts in Blockchain technology. The Lead Developer is Daniel Connolly, while Steve Shadders is serving as the Technical Director, overseeing every technical aspect of the improvement on Bitcoin SV. The team also has a pool of engineers who are skilled and are experts in C++ and Bitcoin protocol. Additional support and backup are also provided by nChain.