info_outline What is EOS

General Data and Information. EOSIO was developed and launched by block.one (white paper released in 2017), a company headed by Daniel Larimer (formerly of Bitshares and Steemit) and Brendan Blumer. It was one of the most famous (if not THE most) ICOs (Initial Coin Offering), with an almost year long uncapped ICO being offered to investors between June 2017 and June 2018, resulting in a funding of almost 4 billion US dollars.

The EOS token is mainly used for the “purchase” of network resources (CPU/RAM) required to interact with the blockchain, but it also finds use in being a common currency for the DEXs and dApps built on the EOS blockchain as well as being a measure (when staked) of voting weight for choosing block producers. 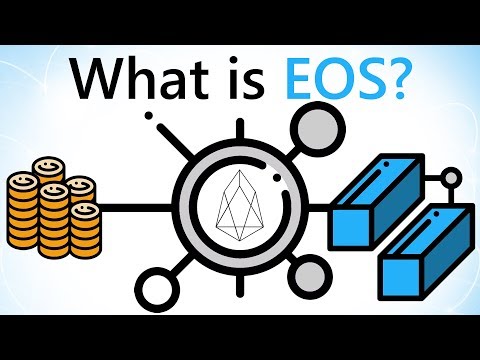 What is EOS? How Does it Work? | Blockgeeks

What is EOS? How Does it Work? https://blockgeeks.com/guides/eos-blockchain/ EOS is a smart contract platform much like Ethereum. EOS, however, promises the ability to perform mi ...

What is EOS? How Does it Work?

EOS.IO software utilizes the only known decentralized consensus algorithm proven capable of meeting the performance requirements of applications on the blockchain, ​Delegated Proof of Stake (DPOS)​. Under this algorithm, those who hold tokens on a blockchain adopting the EOS.IO software may select block producers through a continuous approval voting system.

The whitepaper of EOS is 8 Pages long.

EOS was founded back in May 2017. Its source code was released publicly on github on April 2017 under the MIT License license. Organization wise, EOSs Development is Semi-centralized and is being developed under the lead of Daniel Larimer.

The consensus on which the EOS network is run is called Delegated Proof of Stake, while the underlying algorithm is called DPoS. In the current state of EOS currently is Working product

Official Subreddit for EOS: The Blockchain for Commercial Scale

The Most Powerful Infrastructure for Decentralized Applications for enterprises.
General EOS discussion and support. Questions encouraged.

🛑NO Spam
🛑NO Toxicity
🛑NO Advertising
🛑No Trolls

Violators will be warned, restricted, then banned.

There are no events for EOS in the next 3 Months

The Google Trends chart displays the search interest on google in EOS relative to its peak over the last year. A rising chart shows growing interest int he project.

Every change to the codebase of EOS is registered as a commit. More active projects have many commits, dead projects nearly none.

Convert between EOS and USD with the live EOS prices, aggregated from all big exchanges that trade EOS.

Brendan Blumer - Chief executive officer Brendan was an early investor in blockchain and transitioned to full-time involvement in the space in 2016 when he met business partner Dan Larimer and they co-founded Block.one. Prior to this, Brendan founded okay.com, a collaborative data-sharing ecosystem for the Asia Pacific property market that has grown to be Hong Kong’s largest digital property agency.

The field of cryptocurrency is expanding at an undying rate. One of the most interesting cryptocurrencies to have emerged on the scenes is EOS. EOS is a network based on the much-famous Ethereum Blockchain. This is where it gets its unofficial naming i.e. Ethereum Operating System (The Analyst Team, 2018).
One can say EOS is an updated version of the Ethereum Blockchain, but a more improved and updated version. EOS technology was developed with the primary aim of building a network that can support and provide a more efficient and scalable platform for decentralized applications. It performs a number of similar functions, but more efficiently and swiftly. When Ethereum was released initially, it claimed to have been the first Blockchain to support decentralized applications. Sooner, it was revealed that it needed more improvements as it was plagued by a lot of scalability issues. What EOS technology does, in summary, is that it adds another layer to the Ethereum network to help address these issues, taking the world closer towards the possibility of decentralization.

EOS has a working product, but it is centralized. The purpose of consensus algorithms is to keep a Blockchain secure.
The parent company of EOS, Block.one has come up with many DApps (decentralized applications) after they launched their Mainnet (fully developed and deployed Blockchain protocol). As an estimate, there are around 350 DApps working on the EOS network, which are published by both block.one and the community members of the EOS network. The most famous of them all, perhaps, is Voice. Voice is a social media platform, officially launched by block.one, that allows its users to post and share content (Bloomberg , 2019).

The original brain behind the EOS technology is Dan Larimer, the guy who is widely acknowledged for his genius maneuvers that gave new life to Steem (a social Blockchain network that rewarded its members for sharing content), and BitShares (a cryptocurrency trading exchange) (Zamboglou, 2018).
EOS is officially backed up by Block.one, which is a leading company that offers high-performance Blockchain solutions. The company was founded by Brendan Blumer, who is the current CEO, while Daniel Larimer serves as the company’s CTO (Ladeluca, 2019).

How things stand for EOS

There is no upper limit set to the supply of EOS. The inflation rate has been decided by the governing body and is set at 5% currently. However, unlimited supply quantity will raise concerns about inflation in the future.
EOS is comparatively in the community, a new cryptocurrency. The technology’s whitepaper was released in 2017 and that is when this Blockchain network came into limelight. It was backed by a very strong research and marketing campaign by Block.io who ran the longest Initial Coin Offering (ICO) in the history of cryptocurrencies. EOS ICO lasted for a whole year from June 2017 to 2018, and it was not only the longest ICO but is also the most successful of all time, raising a humungous amount of $4.1 billion in the time period (Dale, 2019).
Although the EOS network has experienced a tremendous growth since its inception, recently the cryptocurrency faced a serious public backlash, as people accused them of running a corrupt governing system. It was claimed that a large part of EOS Blockchain’s governance under the Chinese crypto giants ‘Huobi’ were allegedly involved in vote-buying activities. Through this, they were safeguarding the position of their ‘block producers’ (BPs). BPs are decentralized bodies that constantly manage and govern the EOS network – there are 21 in total. Block.one and Huobi both put out public statements, but there was no clear message that acknowledges or denies the accusations (O'Neal, 2018).

The mathematical model of the EOS network is based on the technology’s whitepaper which was published in 2017. After that block.one, under the technical leadership of Dan Larimer, has developed the code. The platform code is an open-source document that is freely accessible on GitHub where Community members are encouraged to develop code and send pull requests to block.one servers, who have the power to make the final decision.

Imagine what starting capital is made available to a normal tech startup. EOS received 4 billion US dollars. What it does with this amount will determine if it succeeds or not. The biggest hurdle is the lack of decentralization. Unfortunately, no measures are being taken to achieve a level of decentralization similar to that of Ethereum, which is why it might be difficult for EOS to take over the market as number one.

EOS started out as an Ethereum based token but has now launched its own main net which uses the EOS.IO software. Block.one has laid out a roadmap that represents the plans of the company for the coming years. Under this project, the company will aim at enhancing the EOS platform in an attempt to make EOS the most widely adopted technology. Two main components of the project are to scale the block production and to make the EOS environment more developer-friendly (About Currencies, 2019).

EOS's potential could be huge if the semi-decentralized Blockchain prevails over other smart contract platforms like Ethereum.

Since the EOS technology is based on the Ethereum network, it is often compared with Ethereum. Other substitutes considered equally similar to EOS are, Stellar and Tron.

There are two notable partnerships that EOS has successfully retained in 2019, and which are keeping the technology competitive in the crypto-world. Tapatalk, a mobile forum app with over 300 million users, has recently launched a Gold Point Reward System which is powered by EOS Blockchain.
They also partner with Wanchain, a project that aims to achieve interoperability between different Blockchains. Wanchain has previously implemented interoperability schemes on the Bitcoin and Ethereum network and is now eyeing EOS as its next Blockchain (Olarinoye, 2019).

Due to the superior performance of EOS (at the cost of decentralization), there are many developers who are interested in developing on EOS network. Recently a special forum was organized by MEET.ONE where EOS developers, more than 40 well-known EOS block producers, and leading DApp companies introduced and adopted the EOS Blockchain (MEET.ONE, 2019).
According to many EOS leaders, a substantial contribution to the EOS ecosystem has come from the community members. There are many subsidiaries of EOS like eosDetroit, eosDublin, eosAsia and EOSGO which are all working towards the development of the EOS network (Fitzpatrick, 2018).

The team behind EOS is officially represented by block.one. Daniel Larimer is the CTO who is credited with developing the technology. Brendan Blumer is the CEO, while Ian Grigg and Brock Pierce serve as partners.