info_outline What is IOTA

IOTA is an open-source distributed ledger protocol that goes 'beyond blockchain' through its core invention of the blockless ‘Tangle’.

The IOTA Tangle is a quantum-proof Directed Acyclic Graph, with no fees on transactions & no fixed limit on how many transactions can be confirmed per second in the network. Instead, throughput grows in conjunction with activity in the network; the more activity, the faster the network. Unlike blockchain architecture, IOTA has no separation between users and validators; rather, validation is an intrinsic property of using the ledger, thus avoiding centralization.

IOTA is initially focused on serving as the backbone of the emerging Internet-of-Things (IoT).. 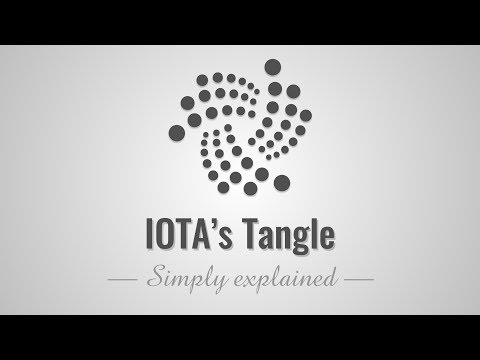 How does IOTA's tangle work and how does it compare to a traditional blockchain like the one Bitcoin uses? In this video I'll explain these topics in a simple way! Correction: bit ...

In this paper we analyze the mathematical foundations of IOTA, a cryptocurrency for the Internet-of-Things (IoT) industry. The main feature of this novel cryptocurrency is the tangle, a directed acyclic graph (DAG) for storing transactions. The tangle naturally succeeds the blockchain as its next evolutionary step, and offers features that are required to establish a machineto-machine micropayment system.

The whitepaper of IOTA is 28 Pages long.

IOTA was founded back in July 2017. Its source code was released publicly on github on October 2016 under the GNU General Public License v3.0 license. Organization wise, IOTAs Development is Semi-centralized and is being developed under the lead of Dominik Schiener.

The consensus on which the IOTA network is run is called Tangle, while the underlying algorithm is called Kerl. In the current state of IOTA currently is Beta version

Welcome to r/IOTA! -- Welcome to r/IOTA! -- IOTA is a scalable, decentralized, feeless, modular, open-source distributed ledger protocol that goes 'beyond blockchain' through its core invention of the blockless ‘Tangle’. The IOTA Tangle is a Directed Acyclic Graph (DAG). IOTA is aiming to be the backbone of the emerging machine-to-machine (m2m) economy of the Internet-of-Things (IoT), data integrity, micro-/nano- payments, and other cases where a scalable decentralized system adds value.

Bot for much more info and links: @IotaHelperBot

There are no events for IOTA in the next 3 Months

The Google Trends chart displays the search interest on google in IOTA relative to its peak over the last year. A rising chart shows growing interest int he project.

Every change to the codebase of IOTA is registered as a commit. More active projects have many commits, dead projects nearly none.

Convert between MIOTA and USD with the live IOTA prices, aggregated from all big exchanges that trade IOTA.

David Sonstebo - Co-chairman of the board of directors & founder David is a serial entrepreneur with a passion for any kind of technology that can push human progress forward.

Co-chairman of the board of directors & founder

Member board of directors

Member board of directors & founder

The actual goal of IOTA is to provide a seamless transaction which is both faster and cheaper. In order to do this, IOTA has replaced the blockchain technology with its own technology knows as Tangle (IOTA Foundation, 2018). Tangle is a system of interlinked and individual transactions that are stored across the decentralized network of users. When a transaction is initiated, it needs to verify two previous random transactions, meaning each user plays the role of a miner by processing the previous transactions.
However, it is difficult to process transactions on a decentralized network like Tangle, as the data that needs to be obtained comes from outside the execution environment. To address this problem, IOTA has developed its own protocol, known as Qubic, which provides the solution in the form of quorum based computing (IOTA, 2018). In layman terms, Qubic offers support to the Tangle technology in form of multiprocessing capabilities.

IOTA was founded by David Sønstebø, Sergey Ivancheglo, Dominik Schiener, and Dr. Serguei Popov in 2015 (IOTA Support , 2018). Dr. Serguei Popov, a Ph.D. in mathematics, developed the mathematical model of the technology they call ‘Tangle’, while it was transformed into code form by the software geniuses Sergey Ivancheglo and Dominik Schiener. The whole project is headed by David Sønstebø who is said to be an excellent businessman and equally talented in technology. The team is well reliable and trustworthy, owing to the fact that they have all been in the Crypto industry for a considerable time in their career.

How things stand for IOTA

IOTA undoubtedly has an unmatched potential to be used as a major means of transaction in many real-world scenarios. Recent developments have occurred which are all in favor of the technology. Among them is the acceptance of IOTA as a technology of the future that will lead the IoT industry. To advance this purpose, Süddeutsche Zeitung, one of Germany’s biggest newspaper, held its annual summit in 2018. At the summit, Dominik Schiener (IOTA’s co-founder) met and held a panel discussion with Helge Braun, Head of the Chancellery & Federal Minister for Special Affairs for Germany. The summit also featured Angela Merkel (German Chancellor), Jean-Claude Juncker (President of the EU Commission), and several ministers of the German government. Among the attendees were the top administration of many high-ranking German companies (Mueller, 2018).
The team behind IOTA, at IOTA Foundation is reportedly working with Deutsche Telekom, Europe’s largest telecommunication providers, and Deutsche Bahn, world’s second-largest transport company to adopt IOTA and contribute to the IOTA’s Data Marketplace (Mueller, 2018). Adding to this, Jaguar Land Rover, which is one of the leading automobile manufacturers in Europe, is working on a project that will reward its drivers with IOTA cryptocurrency in exchange for sharing data related to their location, road quality, car health, navigation, etc. (Chavez-Dreyfuss, 2019). All these developments regarding IOTA technology shows how serious and impactful this cryptocurrency can be.
In January 2018, a wave of IOTA thefts swept the internet. A conman set up a website that claimed to guide the masses with the basics of IOTA and provided them with services like seed generation for their IOTA wallets. Deep down the otherwise seemingly safe website lied the scam of stealing IOTA coins from the user’s wallets. Fortunately, Europol with the help of German and British authorities, and the support of the IOTA’s active community was able to track down and arrest the man behind the notorious scam (Cimpanu, 2019).
Additionally, what is considered the biggest achievement and the latest development regarding IOTA is that it is set to become standardized. According to Richard Soley, CEO of Object Management Group (OMG), the IOTA technology will be standardized by the International Organization for Standardization (ISO) by the end of the next year (Jain, 2019). After standardization, new horizons will open up for IOTA; it will become open-sourced, widely recognized and adopted, resulting in a boom in the IOTA’s market capital share.

The IOTA Foundation is the main body representing and developing the IOTA technology. Under their hood, they have many projects which aim at renewing, updating and developing the code frequently.
As mentioned earlier, Tangle is the technology that enables the IOTA currency to become a decentralized asset, unlike all other cryptocurrencies which are based on blockchain technology. In December 2018, IOTA Foundation in partnership with Cybercrypt A/S developed a lightweight trinary cryptographic hash function that is designed to provide security against all known cyber and crypt-based attacks. The hash function has been named Troika (Harbor, 2018).

With the industry talking about the Industrial Revolution 4.0 and the paradigm shift to the Internet of Things, IOTA offers a strong and impactful resource in its core. The possibility that IOTA could eliminate all middlemen from the financial transactions and make transactions more scalable further affirms that it is certainly the technology of the future if the IOTA foundation manages to breach the chains of the trilemma by integrating the Coordicide.

Coordicide, which is being named as the next step in IOTA’s evolution, is a project that eliminates all the coordinators and middle parties from the financial transaction, rendering IOTA a long-term decentralized platform (Markus, 2019).
Another project supporting the IOTA technology is the Trinity Wallet being launched by the IOTA Foundation that is designed specifically for IOTA cryptocurrency.

IOTA technology has seemingly many real-world applications. With the developments towards IoT, the use of IOTA increases day by day. The technology has massive potential of proving itself to be technology of the future.

IOTA was created with the sole purpose of making the financial transactions faster and more secure while cutting down on the processing fees. It uses a decentralized technology known as Tangle, as opposed to the blockchain concept that all other cryptocurrencies perform on. It solves the problem with apparently zero- processing fees while allowing for much smaller transactions. The technology was developed for the ‘Internet of Things’ devices and is, therefore, the technology of the future. Keeping these facts under consideration, it would not be wrong to say that there is no other substitute for IOTA.

IOTA has already partnered with many industrial giants and is working on many different projects at the moment. The Foundations has developed the IOTA Data Marketplace in partnership with Bosch (Bosch Connected Devices and Solutions GmbH, 2019), is working on an innovative parking app with Edag (Lange, 2019). A smart city project is in the testing phase in collaboration with Fujitsu and Samsung (Paradigm, 2019).
Also, IOTA Foundation is looking to generate seed funds with the start-up studio Nova for entrepreneurs that aim to contribute to the decentralized ledger technology (O'Brien, 2019).

The team behind IOTA is the IOTA Foundation led by David Sønstebø. Among the founders are Sergey Ivancheglo, Dominik Schiener, and Dr. Serguei Popov. The supervisory team is led by Richard Soley, while the executive members all possess top-notch resumes and have ample experience in the relevant field (IOTA Support , 2018).