info_outline What is Monero

General Data and Information. Monero (XMR, formerly BitMonero) is a fork of Bytecoin (on 18th April 2014) that emphasises the obfuscation of private data (like addresses and transaction values) making for a blockchain with a public ledger with open access for broadcasting and writing transactions but with complete privacy for users. Each user can read the portions of the blockchain that relate directly to their own addresses, or can choose to broadcast unobfuscated transactions. The rationale behind the emphasis on privacy is the principle that no outside observer should have the unrestricted right to view a user’s private financial transactions and net worth. This holds true for the current financial system, and Monero aims to recreate this right to privacy in the crypto-currency ecosystem. This privacy is achieved through a combination of enforced privacy, bulletproof zero-knowledge proofs, ring confidential transactions, stealth addresses, ring signatures and ASIC resistance. Milestones.

18th April 2014 - Monero blockchain launched. 10th January 2017 - Confidential Transactions and Ring Signatures adopted, known collectively as Ring Confidential Transactions (RingCT). October 2018 - Bulletproofs (zero knowledge proofs) adopted on chain. Utility. Monero (XMR) aims to be fiat currency replacement, a store of value. By implementing privacy features by default, it restores the right to privacy of a user whilst being able to utilize and harness the strengths of a public blockchain, namely resilience, decentralization and censorship resistance. Due to the untraceability of transactions, all Monero coins are essentially fungible as no transaction history can be attached to them, thus making them functionally identical. Further developments include the ability to obfuscate IP addresses to further enhance privacy protections for users. Significant Features.

Privacy coin, transaction addresses and amounts are obfuscated by design. Privacy of transactions mimics the use of cash in current economies. Monero is fungible, past transactions can not be traced, thus all coins are indistinguishable from other coins. Open and unrestricted access with no third party middleman for approving transactions. Transactions can be revealed by a user if required. Average blocktime of 2 minutes; Total supply of 18.4 million XMR (then 0.3 XMR per minute forever); Consensus via Proof of Work (CryptoNight). References: .. 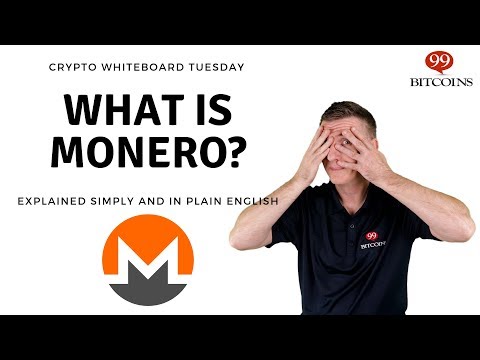 What is Monero? A Beginner’s Guide | 99Bitcoins

Support our channel by using the Brave browser, browse up to 3 times faster, no ads, get rewarded for browsing: http://bit.ly/35vHo0M Monero is a private decentralized cryptocurre ...

What is Monero? A Beginner’s Guide

Privacy and anonymity are the most important aspects of electronic cash. Peer-to-peer payments
seek to be concealed from third party’s view, a distinct difference when compared with traditional
banking.

The whitepaper of Monero is 10 Pages long.

Monero was founded back in April 2014. Its source code was released publicly on github on April 2014 under the Other license. Organization wise, Moneros Development is Decentralized and is being developed under the lead of Francisco Cabañas.

The consensus on which the Monero network is run is called Proof of Work, while the underlying algorithm is called RandomX. In the current state of Monero currently is Working product

This is the official subreddit of Monero (XMR), a secure, private, untraceable currency that is open-source and freely available to all.

There are no events for Monero in the next 3 Months

The Google Trends chart displays the search interest on google in Monero relative to its peak over the last year. A rising chart shows growing interest int he project.

Every change to the codebase of Monero is registered as a commit. More active projects have many commits, dead projects nearly none.

Convert between XMR and USD with the live Monero prices, aggregated from all big exchanges that trade Monero.

Although the world of cryptocurrency is growing daily and a lot of crypto coins are flooding the market each passing day, not many people are aware of the limitations battling crypto-giants like Bitcoin. Scalability, network speed, transaction limits, fee charges are just a few issues to name. Another disturbing issue that needs to be addressed is the issue of privacy as it concerns users and their transactions. When a user pays for a cup of coffee with Bitcoin, their wallet address is exposed to the seller whether they want that information exposed or not. This allows him to know the account details and transaction history of the user, which in fact, is quite worrisome.
For this very same reason, Monero was developed with the vision of making transactions completely anonymous. Monero restricts the visibility of user account details and the transaction history linked with the account, until and unless the owner grants you access to the concerned information (Saberhagen, 2013).

Monero has introduced a number of revolutionary features on top of its blockchain network and this has helped it to achieve complete anonymity, something other coins are yet to achieve. The first Monero protocol enabled private transactions. The main transactions were split into multiple smaller transactions and dummy transactions were also added to the main bundle. Only the sender and the receiver were able to see valid transactions. Other people could only see requests for transactions but a little analysis still allowed them to find out the transaction amount nonetheless, but this is better than any other cryptocurrency has achieved.
In 2017, Monero implemented RingCT technology which completely obscured the transaction amount from other users. Another feature that was added in the Monero technology was named as Kovri. It passed the main traffic by rerouting users through I2P nodes. This further brought anonymity on the network as a user’s real IP addresses were not visible and could not be tracked.

Monero was founded by a team of seven, five of whom have chosen to remain anonymous. The other two are Ricardo Spagni and David Latapie. The main lead of the development team nowadays is Riccardo Spagni and is widely known by the nickname ‘Fluffypony’ (BitDegree, 2019).

How things stand for Monero

Monero has been in the news for quite sometimes, but sadly, they are mostly jumping from one scandal to another. In May 2017, Riccardo Spagni released a false announcement that something ‘really big’ was going to come after the next team meeting. Monero’s price skyrocketed to almost double its valuation in anticipation of the news. However, a few hours before the team meeting, he stated that he had only put out the news to provoke speculators and no serious ambitions were behind the news and this plummeted the price instantly to its old price in a matter of minutes (Southurst, 2017).
Since Monero transactions can be anonymous, it has been used in several unethical acts. In January 2019, the wife of a Norwegian multi-millionaire was kidnapped, and the kidnappers demanded $10 million in ransom through Monero tokens (Agency Staff, 2019).
Another incident was with ‘The Wall Street Market’, which was an illegal platform for drugs, stolen data, and fake documents. The platform was put down by German Federal Criminal Police and it was revealed that a whopping amount of $600,000 worth of Monero was seized (Canellis, 2019).
Positive developments for Monero have been very few over the years. One of the important ones is that in 2018, many blockbuster stars like Mariah Carey, Sia, Backstreet Boys, and 42 others started accepting payments in form of Monero. However, this development was very short-lived and limited (Shin, 2017).

The code used to develop Monero is maintained and updated by a team of developers. Their development history on the project can be traced back to their GitHub repository. An interesting development from their side is that they are adamant to make Monero resistant to centralization. Monero, like other cryptocurrencies, relies on mining. Many miners and big companies have invested heavily in mining machines knows as Application Specific Integrated Circuits (ASIC) and indirectly are in hold of the backend processing of cryptocurrencies. Monero is trying to make its network ASIC resistant, and are working on a new algorithm for that matter. This will provide better decentralization to the Monero network.

Monero pioneered the introduction of private cryptocurrency transactions. The developing team is on a good way to create a more robust and better coin. Privacy and anonymity are important because people do not like having their privacy invaded by revealing to others much money they have left after a transaction. Monero is the pioneer of private cryptocurrencies, but with that, they still have big obstacles to overcome. There will be debates about legal aspects as Monero might be used for fraudulent activities and regulations could potentially break Monero’s neck.

Currently, Monero is working to develop an algorithm that could disassociate the network from mining companies and loosen the grip they already have on the network. Apart from making the network ASIC resistant, Monero’s goal is to create a ‘bulletproof’ protocol with the intention of reducing the required data per transaction.

The potential for Monero is huge but it has been limited to just what the public craves; an anonymous cryptocurrency network. Those users who do not have any privacy concerns might still use other cryptocurrencies that provide better incentives according to their needs.

Monero takes the lead and is perhaps the most popular cryptocurrency that offers complete anonymity. Other substitutes like zCash offer private transactions as well.

Monero has not fully exploited its popularity within the business community. The partnerships that Monero develops are very short-lived. For example, Monero partnered with over 45 stars in 2018, who all agreed to take payments in form of Monero coin for their merchandise and concert tickets (Shin, 2017).

The Monero community is active and quite loyal. In fact, it was partly due to their untiring efforts and unity that Monero was accepted as a means of payments by celebrities. The community crowdfunded and orchestrated all the events that lead to Moneros wide acceptance.

The team is led by Riccardo Spagni, who is an expert in his field and an equally capable developer. However, he did put the coin’s repute in hot waters with his shady behavior such as fake announcements to manipulate prices (Southurst, 2017).